For more about these critical studies, click on the book icons or titles.

The New Diaspora: The Changing Landscape of American Jewish Fiction

This collection, a finalist in the 2015 National Jewish Book Awards Anthology category, offers an expanded canon of Jewish writing in North America and foregrounds a vision of its variety, its uniqueness, its cosmopolitanism, and its evolving perspectives on Jewish life. It celebrates the continuing vitality and fresh visions of contemporary Jewish writing, even as it highlights its debt to history and embrace of collective memory. Readers of contemporary American fiction and Jewish cultural history will find The New Diaspora enlightening and deeply engaging. This collection includes Aryeh Lev Stollman's story, "Mr. Mitochondria."

The Subject of Holocaust Fiction

In this captivating study of the epistemological, psychological, and ethical issues underlying Holocaust fiction, Emily Miller Budick examines the subjective experiences of fantasy, projection, and repression manifested in Holocaust fiction and in the reader's encounter with it. This work includes the chapter: Aryeh Lev Stollman's Far Euphrates: Re-picturing the Pre-Memory Moment. 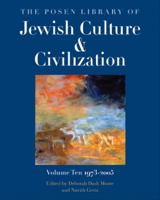 A treasury of Jewish creative works from around the world, this volume of the Posen Library of Jewish Culture and Civilization introduces readers to the great diversity of Jewish civilization, covering the momentous period from 1973 to 2005. Includes the chapter "Tecumseh Road" from The Far Euphrates.

Holocaust Literature: An Encyclopedia of Writers and Their Work

This classic thematic anthology has long been hailed for its exceptionally rich collection of essays, memoirs, stories, poems, and plays, and for its ground-breaking inclusion of classic and contemporary images. Includes Ursula Melendi's essay "All of Heaven for Love" based on Aryeh Lev Stollman's short story "Die Grosse Liebe."

Telling the Little Secrets: American Jewish Writing since the 1980s

Janet Burstein argues that American Jewish writers since the 1980s have created a significant literature by wrestling with the troubled legacy of trauma, loss, and exile. Their ranks include Cynthia Ozick, Todd Gitlin, Art Spiegelman, Pearl Abraham, Aryeh Lev Stollman, Jonathan Rosen, and Gerda Lerner. Whether confronting the massive losses of the Holocaust, the sense of "home" in exile, or the continuing power of Jewish memory, these Jewish writers search for understanding within "the little secrets" of their dark, complicated, and richly furnished past.

Call It English: The Languages of Jewish American Literature

Call It English tells a story of preoccupation with pronunciation, diction, translation, the figurality of Hebrew letters, and the linguistic dimension of home and exile in a culture constituted of sacred, secular, familial, and ancestral languages. Through readings of works by Abraham Cahan, Mary Antin, Henry Roth, Delmore Schwartz, Bernard Malamud, Saul Bellow, Cynthia Ozick, Grace Paley, Philip Roth, Aryeh Lev Stollman, and other writers, it demonstrates how inventive literary strategies are sites of loss and gain, evasion and invention.